Asian Herbs & Noodles is a light summer noodle dish bursting with vibrant fresh herbs and dressed with a refreshing bright flavored peach-ginger dressing. The piquante from the hot pepper and ginger along with the sweetness from the peaches in the Peach-ginger dressing really compliment the minty peppery tastes from the mix of herbs.

The vibrant herbs used in this Asian herbs & noodles dish each have a distinct flavor and compliment each other. All three herbs are members of the mint (Lamiaceae) family. The broad leafed herb with a purple underside and green topside is called Perilla. Perilla has a flavor with notes of anise, mint and clove. I’ve also noticed other flavors in some of the perilla bunches, like cumin and even peanut. It has such complexity it could almost be it’s own curry.

The green broad leafed herb, Vietnamese Lemon Balm, has a perfumed lemony taste, peppery notes, and slightly minty taste. It is used for tea and adds lemony notes to soups when added just before serving.

These Asian herbs appear at Farmers Markets during the late-spring early summer to early fall. They are also found in Asian grocery stores during the season.

The more commonly found herbs cilantro, spearmint and arugula are perfect with this noodle dish when you can’t find the perilla, lemon balm, and peppermint. Cilantro offers the lemony taste, spearmint offers the minty taste and the arugula has a peppery flavor. Basil is also a good choice instead of mint.

Noodles and herbs really bring out the best in one another as the textures play well together. For this noodle dish (and many of the noodles dishes I make), I have been using organic whole wheat spaghetti noodles. They hold up really well after being dressed, even overnight they hold up without becoming mushy.

There are also sturdy gluten-free noodles available too. I find whole-grain, like brown rice noodles, as opposed to noodles made from rice flour, are best for this dish. The otherwise somewhat neutral taste of noodles absorbs the dressing flavors and shows off the vibrant taste of each of these mint family herbs. Since this a cold noodle dish served at room temperature it is a good choice for when the temperatures rise.

Good Choice for a Potluck Dish

This Asian herbs & noodles dish is also an easy one to bring to a potluck and it can be made ahead of time. I just put in a serving bowl and cover with a domed plate that fits within the bowl or plastic wrap, a pair of tongs and we are set to go. The noodles have a tendency to absorb the dressing (exactly what we want the noodles to do), but its a good idea to reserve some dressing and bring it along to freshen the dish just before service. If traveling a distance, it is best to put it in a cooler so the herbs stay bright. 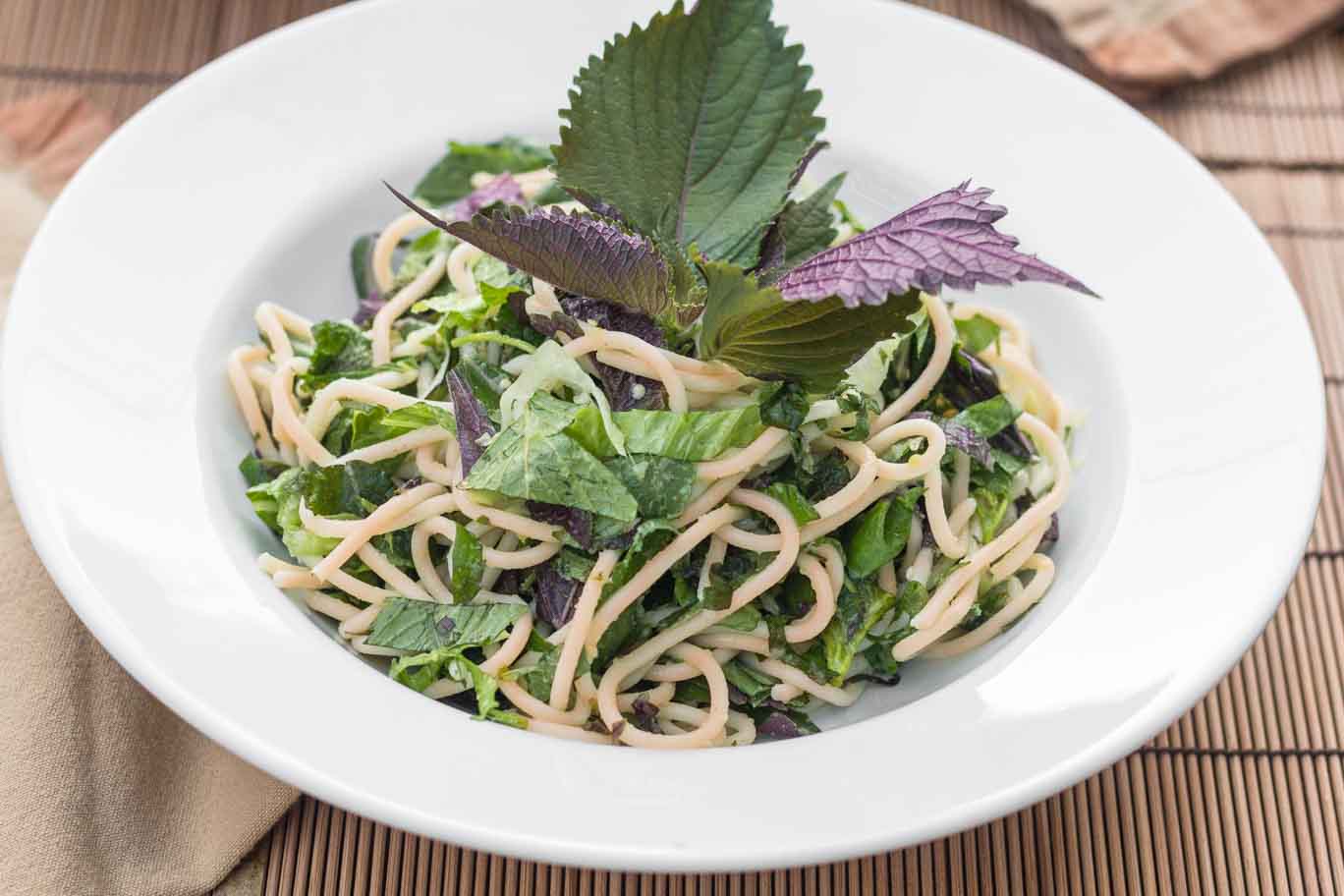 This recipe works well for a smaller amount by simply cutting all of the ingredients in half. I almost always prepare the full pound of noodles as it is nice to have for another dish. Most noodles will last up to three days in the refrigerator.