No need for cream, this oil-free vegan corn chowder gets plenty of lush creaminess from the fresh yellow corn and a little kick from the hot red pepper.

This oil-free vegan corn chowder really shows off the sweet fresh corn of early Fall, which makes September through October a great time to enjoy it. Corn is still coming in strong and the weather has cooled off giving a big welcome to hearty soups like this one. A ripe red jalapeño or Fresno pepper adds a little kick and plays well with the rich natural sweetness and creaminess that comes from blending a portion of the cooked corn. The onion, garlic and spices add depth and roundness, but allow the corn to remain forward. Making corn cob stock from the cobs for the liquid in the soup adds more corn flavor and can be made while you start with the other steps or ahead of time.

Removing the Corn Kernels from the Cob

Removing the corn kernels from the cobs is easily done with a standard chef knife and a wide shallow prep bowl. Cut the pointed end of the cob so it is flat and leave the stalk part on the opposites side to hold onto whiles you make the cuts. Place the cob in the bowl with the flat part of the cob on the bottom of the bowl. Holding the top of the cob straight up or a t at 60 degree angle from the bowl bottom, cut the kernels straight down to about 1 in above the bottom of the cob on all four sides of the cob. Then turn it over and cut the remaining kernels. If you cut all the way down the cob, the knife can hit the bowl and slip, not good.

Another method of removing the kernels is with a mandoline. Some of the hand mandolines don’t have a wide enough setting to cut the full kernels. The classic French mandoline at it’s highest setting is wide enough for most corn cobs. Run the cob through on all sides.

Print Recipe
Early Fall Corn Chowder Recipe
No need for cream, this vegan corn chowder gets plenty of lush creaminess from the fresh yellow corn and a little kick from the hot red pepper. 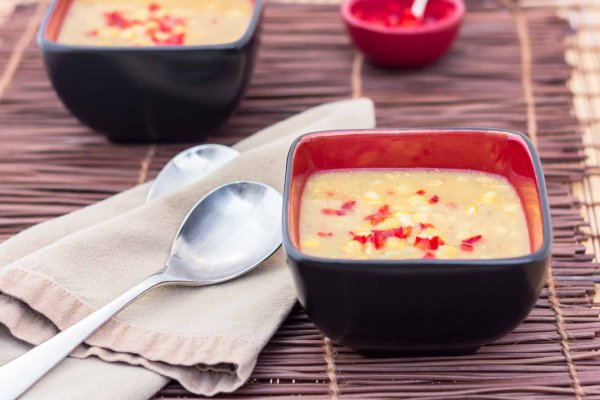 The Noil Kitchen uses cookies to ensure that we give you the best experience on our website. If you continue to use this site we will assume that you are happy with it.OkPrivacy policy