Bursting with the flavors of ripe red peppers and yellow corn, this oil-free vegan corn soup expresses the best of summer.

The inspiration for this oil-free vegan corn soup came from a Farmer’s Market visit years ago during the summer in late July. Yellow corn was piled high and several varieties of peppers were all ripened to their natural beautiful vibrant red color. There is a rich sweet flavor that comes from fully ripened sweet and hot peppers and yellow corn is bursting with flavor. This oil-free vegan corn soup with red peppers expresses the best of summer into fall harvests. It is even better topped with homemade garden salsa fresca.

If you can’t get to a Farmers market, well-stocked grocery stores will have a nice selection of red peppers and corn during the season which is late July to October depending on where you located.

There are many varieties of red peppers with varying levels of piquante, from mild, like the classic red bell to high level piquante, like habaneros. For this oil-free vegan Corn Soup I use a combination of mild and medium piquante red peppers. For the mild, I used the classic Red Bell pepper. Other mild peppers like Poblanos and Anaheim are also really good in this soup. Both Poblanos and Anaheim varieties are mild, but have some kick. Fresno peppers are thin skinned and have a mild, sweet and somewhat piquante flavor. Jalapeno peppers have a little more piquante and sometimes a lot more piquante. Serrano peppers are often quite piquante.

It’s a good idea to take a small taste of each pepper before using so you can gauge how much of each pepper you want to add in the corn soup. The piquante of peppers goes a long way in soup, more so than other dishes like stews. The sweetness of the mild red peppers balances the piquante from the Fresno or Jalapeno peppers.

Corn is almost synonymous with the arrival of the height of summer. Some year I notice that the white corn comes into the Farmers market much sooner than the yellow corn and often grocery stores only have white corn. While white corn is good for some dishes, I patiently wait for the yellow corn to make this particular corn soup. The yellow corn has more depth of flavor and makes for a fuller-flavored corn cob stock.

Chickpeas with their texture and nutty taste and the sweet deep flavor of yellow corn are simply delicious together and really works in the this corn soup. I have made with and with out chickpeas, but found the chickpeas are worth keeping in for the way they taste with the corn kernels. Cooked from dried chickpeas are best and will give you the highly coveted chickpea stock. Canned chickpeas will also do fine for this soup since this soup is more about the fresh summer con and peppers. If you use canned chickpeas be sure to rinse and drain the beans well as the liquid in the can has an off taste.

The chickpea stock from making chickpeas from dried is also good. Liquid from canned chickpeas is not so good. It has a tin taste and often has too much salt. A combination of homemade chickpea stock and corn cob stock which is very flavorful will be perfect too. 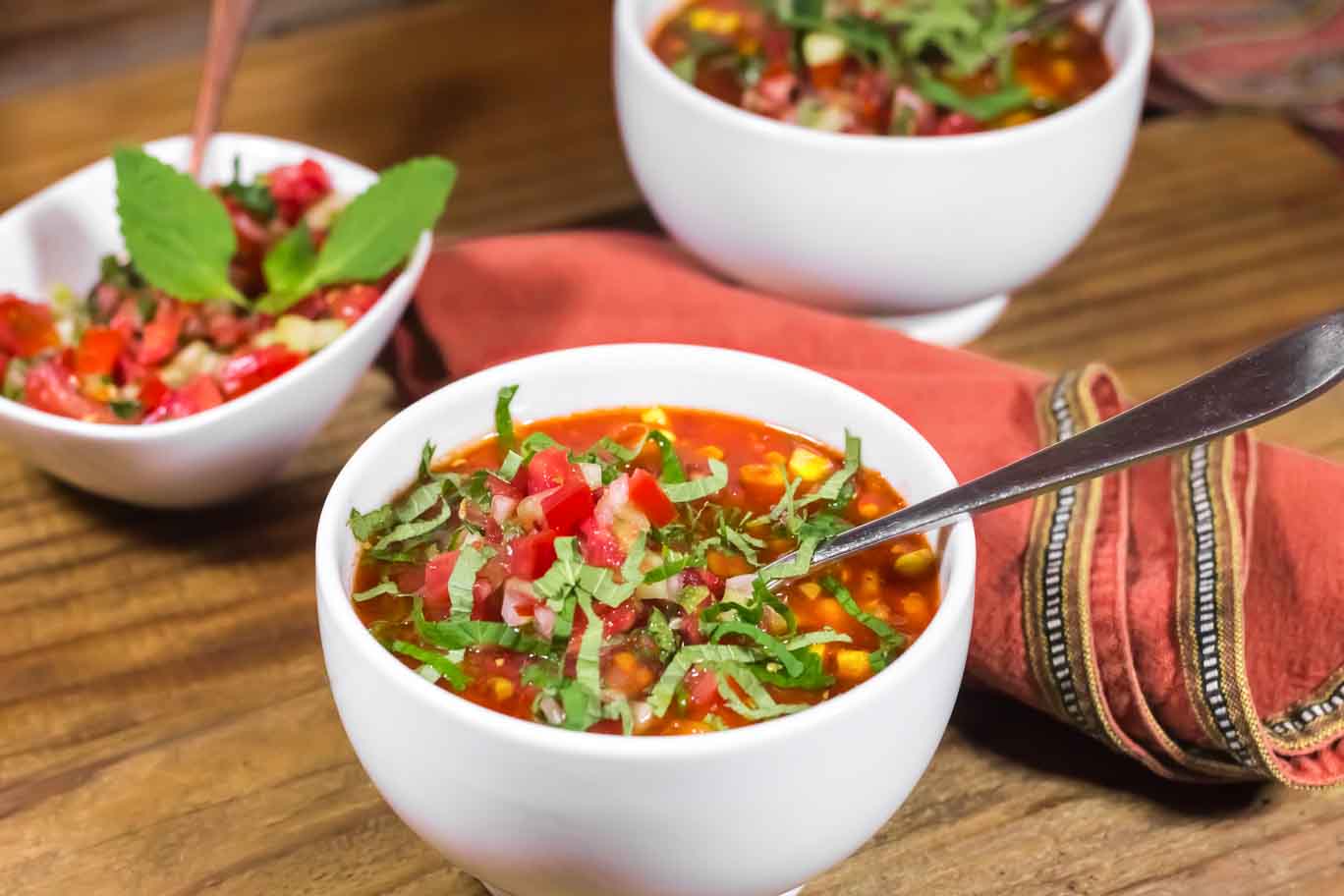